They were the pictures that, for many across the world, were the defining image of the aftermath of Romania’s 1989 revolution: emaciated children clothed in rags, looking into the camera with desperate eyes amid the squalid decay of the country’s orphanages.

Christmas Day will mark 30 years since Nicolae Ceaușescu, Romania’s megalomaniac, isolationist dictator, was convicted in an impromptu trial and shot dead together with his wife. His execution ended more than two decades of rule that brought poverty and misery to the majority of the country’s population.

In the three decades since his fall, only a handful of people have faced legal punishment for their roles in Ceaușescu’s repressive regime, and there have been no criminal cases over the tens of thousands of children mistreated by the regime’s inhumane network of juvenile internment institutions.

Investigators from the Institute for the Investigation of Communist Crimes say official charges could be laid next year.

The country’s orphanages began to fill up from the late 1960’s when the State decided to battle a demographic crisis by banning abortion and removing contraception from sale.

Many of the children in the orphanages were abandoned by parents too poor to look after them.

The most horrific abuses took place in orphanages for disabled children, who were taken away from their families and institutionalised. At the age of three, disabled children would be sorted into three categories; curable, partially curable and incurable. Across the country, there were twenty-six institutions for category three disabled children. Investigators from the Institute picked three to investigate and found shocking mortality levels amongst the children. Seventy percent of the registered deaths were from pneumonia. There is testimony of children suffering from frostbite, of children literally being eaten by rats, being kept in cages or being smeared in their own faeces.

The list of those being prosecuted for the deaths is classified.

There are suspicions of trafficking children in some orphanages in Romania, Labour Minster Dragos Pislaru told a TV show on Sunday.Labour Minister also stated that he received this information from the intelligence services in May, when he took office. At the moment, there are ongoing investigations in four or five orphanages “from the South of the country”.

He also said that many children from the Romanian orphanages are sedated with strong medicines having similar effects to drugs.

“Information will reach to the public opinion after we will see that the evidences are prepared”, Pislaru added.

The shocking statements are coming after about two weeks since seven employees of the Sfanta Maria Social Services Complex within the General Directorate for Social Assistance and Child Protection of the Sector 1, have been remanded by the Court of Bucharest. They are accused of maltreatment of a minor, abuse of office and embezzlement.

Last year only, 1,555 children reached to be cared for by the state.

“There are 1,100 public institutions in Romania in which children not cared of by their parents are protected. Since we reestablished ourselves, we perform inspections. We face relatively frequent with complaints coming from employees, from children or from parents; not all of them are that important as the ones mentioned by Minister Pislaru, but we had this kind of complaints also – trafficking. We sent them further, on our turn”, stated the President of the National Authority for Child’s Rights’ Protection, Gabriela Coman.

The actions this institution can take following an inspection are related to seizing the criminal investigation bodies, who verify such suspicions, she mentioned. “Further, the complaints related to abuses such as tying children or violence against children performed by the employees are immediately seized to the President of the County Council, who is the employer of the personnel in these centers and who can take the adequate measures”, Coman added. 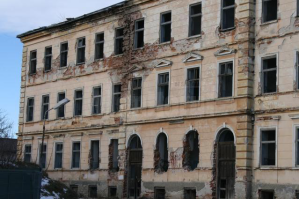 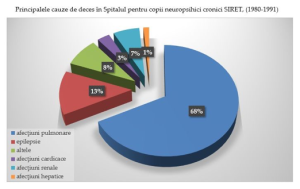 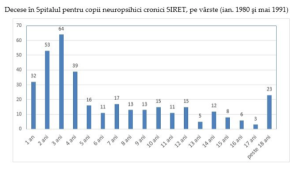 Siret is a town situated in Suceava County, North-Eastern Romania, only two kilometres from the border with Ukraine.  It is an isolated place; ideal to hide away children not considered ”normal”. In the 1980’s, during the Communist era, Siret was home to 2,000 orphaned, sick and abandoned children.

Criminal complaint for the death of 340 children, in the Siret horror orphanage, during communism. Valentin Nas shared the link.

The image of the children in the Siret Orphanage is from the personal archives of Ronald Federici.

The Institute for the Study of Communist Crimes (IICMER) has filed a complaint with the Attorney General’s Office concerning the inhumane treatment of orphaned children confined in the Siret Hospital for Children with Chronic Neuropsychiatric Condition (HCCNC). 340 children died there between 1980 and 1989.

IICCMER has denounced the deaths which occurred in the last decade of the communist regime. The largest number of deaths, 81 children, was recorded in 1981.

According to IICCMER’s statement released to the editorial, most children died of illnesses that could be treated, and for most of them the deaths were caused by the inhumane way they were treated in the orphanage. A very large number of children have died during winter, most of them due to pneumonia, epilepsy, heart, kidney, and liver diseases.

Most children died when they were between one and four years old. Many of the children admitted to the Siret orphanage were from Suceava County, but also from Bucharest, Bihor, Timiş, Dâmboviţa, Constanţa.

“Following the analysis of death documents and death certificates, carried out by IICCMER experts and by a team of forensic pathologists, we have found that, on the one hand, there were increased mortality rates in the case of easily preventable or early diagnosable and properly treatable pathologies, and, on the other hand, there were deaths that support, by their very nature, our conclusions regarding the existence of a regime characterized by inhumane treatments applied to minors in the hospital.”

309 employees at the hospital-orphanage in 1989

The HCCNC was operating under the Ministry of Health and was headed by a doctor/manager appointed by order of the minister. Since its inception in 1956 until 1991, the hospital has been administered by nine doctors, and the last of them has been running the hospital-orphanage for 24 years.

At the end of the 1980s, the orphanage included 14 specialist doctors, 109 nurses, 115 auxiliary staff, 12 administrative staff, 12 staff runing the school and 47 workers.

There is a legend that hundreds of children were left to die in a field.

Since the establishment of the hospital-orphanage in 1956 until 2001, 1,500 children have died of the total of 8,886 children who have been placed in the Siret institution.

After the death of 81 children in 1981, the number of deaths fell in 1982 and 1983 following the management’s decision to transfer out a very large number of children.

Among the staff who worked at Siret HCCNC during the communist era there is a legend of an order coming from the Communist Party leadership regarding the fast release from hospital of a large number of patients, an order which was quickly executed at the end of November 1983. The hospital register has recorded the transfer of 750 children over just a few days at the end of November 1983. According to former employees, a large number of these children, especially those with unknown parents, have never reached their transfer destinations, being instead isolated on a field and left to die without being registered.

IICMER states that it could not confirm the information, but it continues the checks.

IICCMER said it would file criminal complaints for inhumane treatments for the period 1956-1980, but “given the high volume of work, we can not predict when the actions will materialize,” the Institute’s spokeswoman added.

771 children died during 1966-1990 in the Romanian foster homes, IICCMER.Posted by: Alina Grigoras Butu in SOCIAL, SOCIETY & PEOPLE        The Institute for the Investigation of Communist Crimes and the Memory of Romanian Exile (IICCMER) has filed a denunciation to the Prosecutor’s Office for inhuman maltreatment over children admitted to foster homes during the communist regime in Romania. The case mainly refers to the sick or disabled children who used to be admitted in the hospital foster homes in Cighid, Pastraveni and Sighetu Marmatiei.

According to IICCMER for Gândul online daily, a total of 771 children died in there during 1966-1990, most of them due to medical causes that could have been prevented or treated. The IICCMER experts and legists say the cases revealed that children were submitted to inhuman treatments and aggressions. Overall, there were over 10,000 such victims in the communist foster homes.

These children used to be considered irrecoverable from the medical point of view, suffering severe handicaps, but many of them were orphans or abandoned by their parents and reached those centers without having serious diseases, IICCMER says.

One of these children abandoned in the foster home in Sighetu Marmatiei was Izidor Ruckel, now aged 37. He escaped the center after he has been adopted by an American family, right after 1990. He told his tragic story to the IICCMER experts.

“They used to beat me and another boy with a broomstick so badly that I thought I was going to die. They used to sedate us, they kept us isolated,” Izidor recounted, as quoted by Gândul.